Wayfound Victoria: Wayfinding Guidelines (‘the guide’) is a free resource for people working for local councils, State Government authorities and private companies who are responsible for aspects of wayfinding and signage systems.

The guide has been published by the Melbourne Visitor Signage Committee

In 2012, the CEOs of five Melbourne and State government authorities agreed that poor signage was a problem for visitors to Melbourne. Large-scale development and the city’s population growth meant Melbourne was getting bigger, denser, busier and more difficult to navigate.

As the number of visitors increased, so did complaints about poorly maintained signs, inconsistent information and ineffectual sign placement. In some areas of the city there were too many signs, and in places like Southern Cross Station, where arriving visitors most need orientation and directional information, there were none.

The problem was clear, but the solution was not, as none of the relevant authorities were solely responsible for addressing the situation.

Wayfinding signage in Victoria is inconsistent, poorly coordinated and unreliable.

A person’s journey can involve travel by foot, wheelchair, bike, public transport or car across more than one local council area. A single journey can mean relying on many different signage systems provided by a number of different authorities.

In Victoria, each responsible authority makes its own decisions about signs – their design, what is signed, the information they carry, naming conventions and placement. And no authority is responsible for ensuring that these many different systems join up along routes that cross municipal boundaries or link destinations and transport networks.

So, each time someone moves from one form of transport to another or each time they cross from one council area to another, the signage system also changes in its look and feel, and the information it carries.

In the absence of a mechanism to address this problem stated above, the CEOs established the MVSC to improve signage.

Comprised of five Inner Melbourne Councils – Maribyrnong, Melbourne, Port Phillip, Stonnington and Yarra – and the Department of Transport, the MVSC started work in 2013, developing ’business rules’ for the design and installation of signs by local and State government bodies. These rules were intended to improve the consistency, reliability and integration of direction and information signs.

The MVSC’s first initiative is Wayfound Victoria: Wayfinding Guidelines. This guide encourages the use of common signing principles and guidelines for pedestrian, cycling, public transport and road signs in Victoria to make people’s journeys easier. It also includes design and technical information for a pedestrian signage system, and guidance for placing and installing the signs.

A number of people with specialist skills – such as traffic engineering, wayfinding, graphic and industrial design, market (user) testing, accessibility auditing and business case assessment – assisted with the guide’s development.

The MVSC’s vision is that people travelling in Victoria need only understand one signage ‘language’.

All direction and information signs – be they local council pedestrian signs or State Government cycling or public transport signs – will carry consistent information, use common graphic standards, and be installed along routes that link key precincts, attractions, transport networks and municipalities.

This guide is a free resource to improve the
consistency of wayfinding signage across Victoria.

This guide is a free resource to improve the
consistency of wayfinding signage across Victoria.

Thank you for downloading!

Email to a colleague 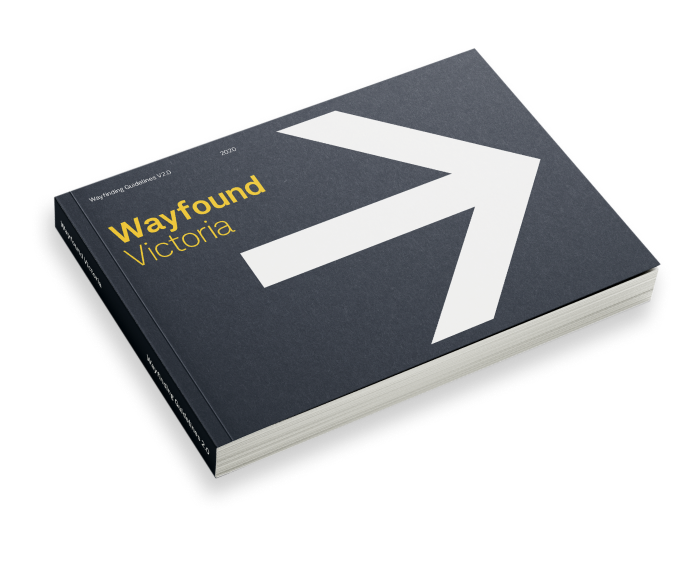